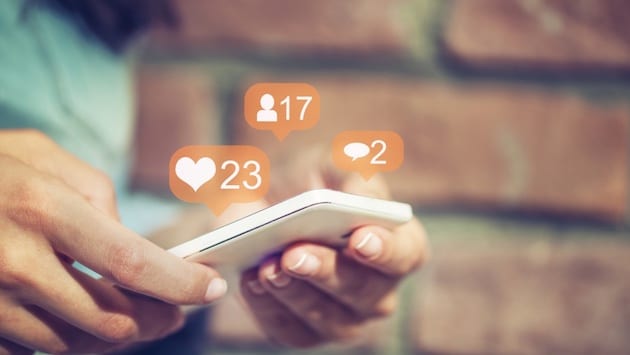 5 Trends That Will Change Social Media in 2018

Earlier this month, Facebook announced changes to its News Feed algorithm that will once again shift the type of content users to be from their friends and family — instead of the Pages they follow.

In other words, posts that spark the greatest amount of discussion among users — especially when shared by those in their own personal networks — are expected to rank better.

According to Facebook, live videos receive 6X the engagement as non-live ones, which bodes well for their sharability and potential for such engagement as comments and Likes.

On top of that — perhaps to help boost this engagement — Facebook’s VP of Product, Fidji Simo, announced last week that the channel would be introducing a Watch Party feature, in which a group of Facebook users can all watch the same video at the same time. However, it’s worth noting that Watch Parties can take place even if the video isn’t streaming live.

“With everyone watching, commenting and reacting to the same moments together,” Simo’s statement reads, “it creates a shared viewing experience for video that helps build the kind of community and engagement we’ve seen with Live.”

So, does this indicate a decline in live video? Not quite. The only real shift that we expect to see is a potential rise in engagement with live videos after they’ve already ended — that is, a group of users who missed the broadcast who all missed it can watch it together later on.

Usership data aligns with these moves by Facebook. According to Social Media Examiner, 61% of marketers plan to increase their uses of live video, and 69% are eager to learn more about it. And in 2017, the number of marketers incorporating live video into their strategies increased by 14%.

So where should you be planning to focus your live streaming efforts in 2018? Well, if Facebook is an important part of your overall social media strategy and you’re looking for ways to adapt to the latest algorithm changes, live video is a great place to start (if you haven’t already).

Otherwise, you’ll want to consider where your audience already spends time on social media — and try to connect with them on those networks.

As for what to broadcast, there are a lot of brands out there that are nailing this strategy across several use cases. For example, many brands are using Facebook, Instagram, and Twitter to live stream events. This approach aims to keep your followers engaged with your brand by bringing an event they otherwise might not be able to attend directly to their screens.

At INBOUND 2017, for example, HubSpot shared Facebook Live interviews with speakers so our followers who couldn’t join us in Boston still had the opportunity to learn from the experts:

Brands can also use live video for customer service by hosting Q&A sessions and product demonstrations. These videos drive engagement because hosts can ask for comments, questions, and feedback from the audience.

If you’re only thinking about messaging apps such as Facebook Messenger, WhatsApp, and WeChat as alternatives to traditional text messaging, think again — messaging apps are used by 4 billion users worldwide, and there’s a tremendous opportunity for brands to leverage this presence.

More specifically, many brands are using messaging apps to communicate one-on-one with customers, which is completely changing the way customer service gets done. These apps provide a faster and easier way for customers to get the assistance they need, rather than being placed on hold or waiting for a returned email. Deploying messaging for customer service is more scalable and cost-effective for businesses, and by providing a better experience for the customer, brands can solve their problems quickly and retain them more easily.

When HubSpot CMO Kipp Bodnar wrote about how buyers want to talk to your business in 2018, messaging was one of the three major channels he cited. It’s less about “starting the conversation,” he wrote, “but more about automating it in a way that’s managed on the back end, to determine which human might be needed to respond to a particular question.”

For example, Hyatt uses Facebook Messenger for 24-hour customer service, where guests can make reservations, ask questions, and get recommendations for their trips: 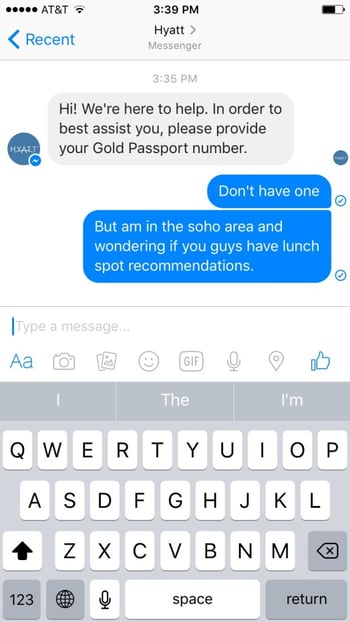 So far, this theory is well-supported by the stats: nearly a quarter of all apps that are downloaded are abandoned after just one use — but that number is 11% lower for those with in-app messaging features. 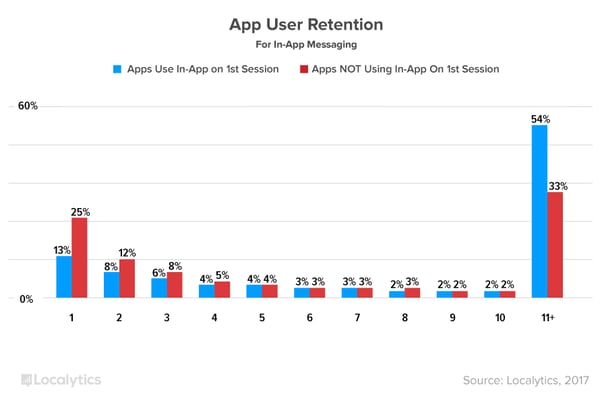 In 2018 and beyond, marketers should anticipate less social networking — especially when considering Facebook’s recent changes — and more messaging for instant, real-time connection with audiences.

To scale your messaging efforts, consider building a chatbot to engage with your audience in real-time.

3. Virtual reality will find its way into more and more marketing experiences.

Virtual reality is still somewhat new to the marketing scene, and in 2018, we predict the market will get even more popular.

According to the Consumer Technology Association’s 2018 Tech Trends to Watch, virtual reality is expected to see an 18% increase in revenue, and a 25% increase in units sold.

What’s unique about virtual reality is that it encourages engagement by offering an immersive, memorable experience unlike any other medium — and brands are quickly recognizing that value.

For example, TOMS uses virtual reality to shed light on the mission and impact customers are having. Its mission, “One for One,” refers to its pledge to match with each pair of shoes purchased a new pair for a child in need around the world. While visiting children who received new shoes during a trip to Peru, TOMS shot the following 360-degree virtual reality video to create a firsthand account of the impact this initiative is making:

What’s so great about this video is how transportative it is. Most customers might not be planning a trip to Peru, but all of them can see the direct impact of their purchase. The experience is improved when they use a VR headset or viewer, but the video is still viewable on mobile or desktop devices, so the brand can effectively share its story.

4. More channels will make it difficult to monetize (and therefore, weaponize) content.

When Facebook announced the aforementioned changes to its News Feed, we predicted that it was largely the scrutiny it’s received since it was discovered that the network was weaponized to influence the 2016 U.S. presidential election. And with Pages expected to receive less engagement, that also means it will become more difficult for brands to monetize any Facebook content — especially since it could require a greater spend on Ads to help that content reach the right audience.

But Facebook wasn’t alone in this scrutiny. Just last week, it joined Twitter and Google in appearing before U.S. Congress to explain how these networks will combat the extremist content that is said to have influenced the election and more.

Google, who partook in that testimony, owns YouTube — which the day prior to this appearance announced significant changes to its Partner Program (YPP) that would make it more difficult for Creators to monetize videos.

Instead of only requiring 10,000 lifetime views, Creators must have accrued 4,000 hours of watch time over the past year, in addition to 1,000 channel subscribers in order to participate in YPP. YouTube has also faced a high amount of scrutiny over the past year, most recently after one of its highest-earning creators, Logan Paul, posted graphic and offensive content to his channel.

In other words, as social channels are under more and more pressure to make their networks safer to use — that seems to be translating to it becoming more difficult for brands to gain visibility on them.

We don’t anticipate this scrutiny diminishing anytime soon, which means that this trend is something marketers should keep in mind for 2018. But in the face of these higher barriers, the best way to be discovered on social media continues to be by creating high-quality, personalized content that’s relevant to the audience you’re trying to reach.

That philosophy has always been core to the inbound methodology that we first introduced to marketers to help them become discovered by way of creating valuable content that their audiences might be searching for. And it still remains relevent, but has become applicable to a greater number of channels.

5. Voice search and AI will change the way users discover brands and content.

Voice-controlled personal assistants are being built into everything, from smart speakers, to TVs, to mobile devices.

And as the development of autonomous vehicle technology continues to progress, it’s almost certain that voice activation will be built into self-driving cars, too — after all, many vehicles already come with voice-powered capabilities that allow drivers to make phone calls, for example, without removing their hands from the wheel.

All the while, these voice-powered devices that respond and fulfill our verbal commands are learning more about us. They’re learning to differentiate our preferences and tones in households with multiple people, and they’re beginning to proactively know what information we might request.

Consider that 72% of voice-activated speaker owners already say that these devices have become part of their daily routines. As the type of content available for discovery on these devices continues to grow, along with the ways we look for it, it might not be long before they change the way we browse and consume content on social media.

After all, you can already ask Alexa to read your Twitter feed, for example — and that’s just one social media capability on one connected device.

Want to learn more about emerging technologies like AI? Check out the HubSpot Research report on Emerging Technologies for SMBs.

As this type of technology continues to evolve and is adapted by more users, marketers can prepare in a number of ways. To start, begin thinking about what type of social media content can be optimized for consumption via a smart speaker, for instance. Creating a solution to a need that the user might not know it has is core to marketing — what type of information or content might your target audience seek on social media that’s easier when delivered in this manner?

If you need a little help getting started, check out this data from Google on the type of information users would like to receive from their voice-activated devices. 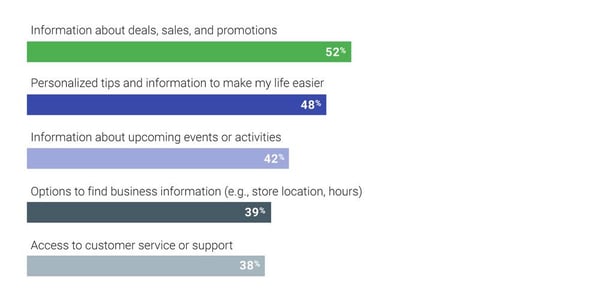