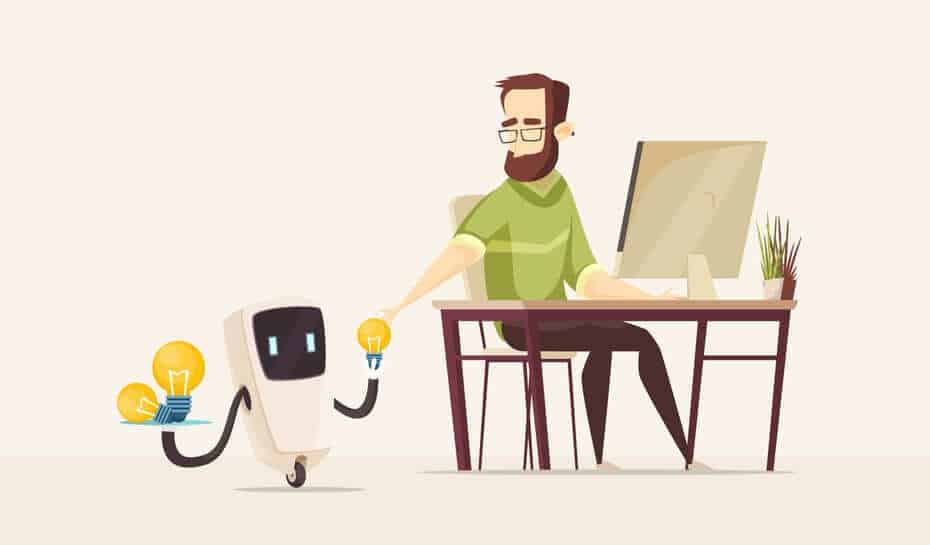 As a graphic designer, you may be skeptical and hesitant toward emerging trends in your field that are sure to rock the boat. I’m right there with you. But some of the smartest minds in the world are working overtime on technology that will convert even the ferventest few.

No doubt many of them are designers themselves! After all, UX is just Graphic Design 2.0. There would be no Facebook, Instagram and so on without the loving touch of visual artists. With that in mind, investors and inventors are going all-in to give graphic designers the tools needed for tomorrow’s next big crossovers, as well as the brand experiences that kids are jonesing for.

TL;DR—Graphic designers run the show. And the following tech trends are setting the scene for the next act.

It’s no surprise that artificial intelligence (AI) is rearing its artificial head in the design space. AI is bogarting the spotlight across many industries, from data entry to manufacturing to city planning. You may have heard of it from movies like 2001: A Space Odyssey or the eponymous A.I. Artificial Intelligence.

We’re not at adoptable Haley Joel Osment robots yet. (Soon, one can hope.) But in the interim, the particular trend promises micro-revolutions of automation and simplification.

Designers will see the technology applied in numerous ways. Our friends at Adobe made a show of it recently when demoing the Sensei platform, while comedian Kumail Nanjiani lended commentary from the sidelines. Check it out below:

The software promises to help “discover opportunities, make tedious processes fast, and offer relevant experiences to every customer” through the wonders of AI. An example feature is “scene stitch,” which helps users weave together scenes out of multiple photos. Thanks to AI and machine learning, the platform zips through thousands of stock images to recommend the perfect components.

It’s neat stuff. During the demo, Nanjiani half-joked a typical reaction many have to AI: “You’re putting so many people out of work!”

“Hopefully we’re making it quicker for them to do their work,” retorted Brian Price, Adobe Senior Research Scientist.

The truth may be somewhere in between as this particular trend gains steam. But the getting’s good right now, with the right attitude. Adopting current AI tools in your work could free you from the “busy tasks” to take on more projects or give more TLC to designs that need it.

Companies like Wix, Firedrop and The Grid are offering AI-injected web design. Users input content and preferences, and the software pops out a perfectly passable website in no time at all—or at least some solid templates—with lessons learned from scanning a myriad of others.

The results still need a dash of this or that from the chef to “kick it up a notch,” as Emeril would say, into a work of art. But if your job finds you going through the motions with basic site layouts, AI developers are hearing your call.

It’s fair to ask how far is too far. Certain “entry level jobs may be lost” as this trend plows ahead, according to Pentagram’s Paula Scher, in an interview with Wired. This could be the new factory assembly line or Flippy (the hamburger-flipping robot, of course). For now you can choose to harness it rather than hide. But whatever you do, don’t ignore it.

Why read something when you can experience it?

With experiential advertising and retail, the term “reaching customers” is more literal than ever. A 2016 study showed that three-quarters of consumers are more likely to be wooed by immersive, interactive marketing. Virtual reality is just a taste of what’s to come. Expect to see more new-age software and hardware that empowers designers to get physical, and in way more than just marketing efforts.

The history books will be kind to Pokemon GO, “The Little Mobile App That Could.” Announcing the mainstream arrival of augmented reality (AR), this $1 billion-grossing behemoth only scratched the surface of AR technology’s potential applications for designers worldwide. Recently, San Francisco-based Leap Motion announced plans for an AR headset, with the codename Project North Star. It could soon make Pokemon GO look like Pong.

Leap Motion’s Creative Director, Keiichi Matsuda, calls the technology “virtual wearables.” With just a few trippy clips posted on his Twitter, Matsuda threw the gauntlet down for the design community. In other words, it’s lit fam. The ways that this and similar innovations can be leveraged by creative teams are virtually endless.

Virtually? See what I did there…

Joining AR and VR is “PR,” or parallel reality. Coined by a team of ex-Microsoft and Disney magicians known as Misapplied Sciences, PR is display technology that allows different people to see different things when looking at the same point. It’s hard to describe and do it justice, so here’s another sweet video. It’s got someone wearing a dragon mask, so you know it’s good.

The company behind the so-called “magic pixels” sums up the technology with some bullet points on its site, along with some proposed use cases: everything from hospitality to traffic signs. For designers, this tech means unique communications with several—perhaps dozens—of different people at once from a single origin. A physical space will soon become infinite opportunities. So get some rest.

Taking it one step further, design will increasingly invade the senses. Seeing and touching are yesterday’s news for some circles in design tech; why not smell and taste an advertisement?

In a post on Medium, “design evangelist” Chase Buckley riffs on a not-too-distant future where consumers engage with their surroundings through multi-sensory interactions. He drops the term “synesthetic feedback” to describe the technical ingredient that mimics the phenomenon synesthesia (e.g. tasting sounds, hearing colors, etc.).

Websites, he posits, will soon make us feel and respond to our feelings. Ads will change based on who’s in front of them. Craving a smoothie? Without typing a word, your screen will show you a smoothie.

(You want a smoothie already, don’t you?)

It can read like science-y mumbo jumbo. But certain design teams out there—even Facebook’s—are buying in. It’s a far cry from the pencil and protractor of “traditional” design. Depending on who you ask, though, it’s the next logistical step for the industry.

“In the future, all designers will need to think about context of how their work is experienced by users,” Traction CEO Adam Kleinbergsaid. “Print is already close to dead as a medium of expression, but design has never been more important.”

It won’t all change the world. For some it’s just the latest dimension for entertainment, with a twist. But there’s potential there to make design more emotional, cerebral and personal than ever. For example, London-based designers The Feelies are creating “multisensory virtual reality” with the goal of experiential empathy.

In other words, design that makes you truly feel. Their project “Munduku: The Fight to Defend the Heart of the Amazon” transported subjects to the Brazilian Amazon in not only standard VR but also smells and sounds, gathered from environmental field recordings and sensorial mapping. If you couldn’t grasp the plight of these populations, maybe you would after this … at least that’s the idea.

Advancements in neurotic networks, or neural networks, will allow you to mimic the brain in product design and A/B testing your visual choices. The Mood As Interface model, as worded by Buckley, will lead to emotion-driven websites, interfaces and digital advertising. We’re entering “computer chip in the brain” territory, but for now the technology is anchored by EEG data. Companies like EMOTIV specialize in “brain measuring technology,” such as wireless EEG headsets and corresponding software that translates brainwave biometrics into action items for designers.

To infinity, and beyond
—

Along with these stories, past trends will persist. The latest portable hardware will make design-on-the-go even easier (see: Apple Pen). Processing power and resolution will improve, yet again (it will never stop). And fonts! Precious fonts. Technology is pushing graphic design forward from all angles. Each tiny step forward is worth celebrating, like a power-up in a video game. Even if it means occasionally shedding old skin and taking a new form.

What “graphic design” implies in 2018 is worlds different from generations past, let alone last year. The field will only keep shifting. Through it all, though, the core of graphic design remains: creative and adventurous people like you.

Andrew is a writer, traveler, and person who really likes food but hates the word “foodie.” He enjoys a good concert, and dabbles in music, comedy, and poker when not writing. Small dogs, those too. You can read more of his blogs at G2Crowd.com.